A Look Inside My Son’s Home Infusions

Although enzyme replacement infusions were initially very frightening, they have become a part of our routine. My son, Cayden, requires this lifesaving medication due to his infantile Pompe disease. It works by replacing the enzyme that his body cannot make on its own.

For the first year and a half of his life, we had to travel to the Children’s Hospital of Philadelphia for his infusions. He’d be hooked up to a telemetry monitor during his stays to ensure there were no issues with his heart during the infusions. Since his heart had been performing so well, we were allowed to start doing infusions at home. 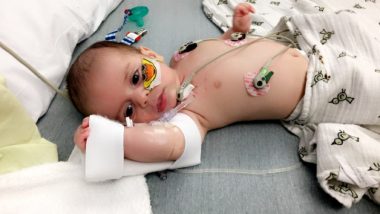 This was a true game changer. We had been looking forward to being in the comfort of our own home, which is much better than being in a hospital. However, it wasn’t easy to leave the nurses that had taken care of my child since he was a newborn. They had provided both of us with shoulders to cry on, listening ears, and helping hands. I had to keep reminding myself what was coming, and I’m so glad that I did!

A nurse now visits once a week to perform home infusions. We’ve developed a routine over the past year and a half. I get all the supplies out and ready before the nurse arrives. Then, I put lidocaine cream on Cayden’s port to numb the area before it is accessed. After that, I take the medication vials out of the refrigerator so they can warm up before being mixed.

Once the nurse arrives, she sterilizes Cayden’s port site, then accesses it. He has to use a special dressing over his port because the dressing that’s normally used causes him to develop a skin reaction. After accessing the port, she begins to prepare the medication. While the nurse mixes the Lumizyme (alglucosidase alfa) vials, I give Cayden his pre-infusion medications. These help prevent an allergic reaction. After she is done mixing the vials, she puts the medication into an IV bag and starts the infusion.

At the end of his infusion, she removes the needle from his port site, which is then covered with a bandage. The port has been amazing. He had it placed when he was just 8 weeks old.

Cayden gets his vitals taken before, during, and after the infusion. These include blood pressure checks, temperature checks, heart rate checks, and respiratory rate checks. Vitals are necessary to ensure that he isn’t reacting badly to the infusion.

A typical infusion day lasts about six hours. It’s become a part of our routine. We’ve developed a great relationship with our infusion nurse. I think this is very important because a home infusion nurse becomes pretty involved in your life.

Although infusions were scary in the beginning, I am thankful that we have this option. Cayden actually receives a double dose of the medication. A study published last year found that a higher dose of Lumizyme can improve the prognosis of people with infantile-onset Pompe disease, reported Pompe Disease News’ Joana Carvalho. It’s not easy to think about what the outcome would be if my son didn’t have this lifesaving medication.

As his mother, I wish that there were a cure already. Deep down, it’s hard to watch him go through this every week. I wish he could have a normal childhood, but I’ve learned that there is no true definition of normal. I make the best of the situation and find the good in all of it.