An explosion in the discovery of new genetic diseases is driving the need for more ICD-10 codes. (Photo by Larry Luxner)

G71.01 is, literally, the code for Duchenne muscular dystrophy.  Q93.51 stands for Angelman syndrome, and G40.419 covers generalized and treatment-resistant epilepsies, which groups like Orphanetdefine as including Dravet syndrome.

All three designations became official on Oct. 1, 2018, joining some 70,000 other diseases listed in the latest iteration of the International Classification of Disease (ICD).

Known as ICD-10, the list was introduced in 1990 by the World Health Organization, and is coordinated in the United States by two federal agencies: the Centers for Medicare & Medicaid Services (CMS), and the National Center for Health Statistics, a part of the Centers for Disease Control and Prevention (CDC).

Twice a year — in March and September — federal officials, industry leaders and advocates meet at a 200-seat auditorium in Baltimore to consider additions and revisions to ICD-10. These events are livestreamed via YouTube and are generally well-attended. The next public forum, advocating for codes that will take effect this Oct. 1, is set for March 5-6.

“These codes are really important,” Paul Melmeyer, director of federal policy at the National Organization for Rare Diseases (NORD), said to BioNews Services, publisher of this website. “For one, it helps define the specific disease the individual has — because if an ICD-10 code is not available, physicians have to use other codes that may describe the symptoms, but not the underlying disease.

“Other healthcare professionals aren’t going to necessarily know the underlying problem, only the symptoms that were placed in the electronic medical record.”

Another problem, Melmeyer said, is that without a code, it’s much harder for insurance companies to reimburse for a physician’s services and offer adequate coverage to patients.

And “without a diagnostic code within the ICD-10 system, it’s very difficult to track how many people have that disease, where they are, and all the characteristics of the disease,” he added. “We want to be sure our member organizations are fully equipped to apply for codes themselves.”

Jayson Slotnik is the principal and founding member of Health Policy Strategies, a biotech and health issues consulting firm in Bethesda, Maryland. He said getting listed has become an especially difficult process in recent years, as the CDC is overwhelmed with code requests for hundreds of newly discovered rare diseases.

“They’ve gotten very particular and are dragging their feet, so you have to be aggressive. You may not ever hear back from them. But if you make the agenda, it’s a full-day meeting in Baltimore, and you get about 10 to 15 minutes to make your presentation,” Slotnick said at a 2018 NORD rare disease conference in Washington, D.C.

The good news, he added, was that “if you’re selected to appear on the agenda, you’re about 80 percent of the way there. They wouldn’t even put you on the agenda if they didn’t think you’d get across the finish line.”

‘Preaching to the choir’

Slotnick advises that groups make certain their applications are well-organized.

“Similarly, at the public meeting, it’s got to be pretty well-focused on the clinical aspects, and how this works from a coder’s point of view,” he said. “That’s very different than what the physicians or manufacturers think. Bring a coder into the process from the beginning. You want to preach to the choir, and in this case, the choir is the CDC.”

Usually, he said, between 20 and 25 applications are reviewed at a typical meeting, although there could be as many as 50 to 60. 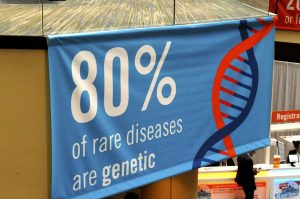 The discovery of new genetic diseases is driving the need for more ICD-10 codes.

“We care about this for a number of reasons,” Slotnick  said. “It gives the patient an identity. It’s demoralizing in a way, when they receive this horrible diagnosis and there’s no code for it. The second benefit is for surveillance in epidemiology, from a societal point of view. It’s important to know how many people have this disease.”

Slotnick, who has advised patient groups on at least half a dozen ICD-10 code applications, said the entire process can take as little as six to as much as 18 months. He stressed approved treatments are not necessary to obtain an ICD-10 code, but applications by advocacy groups do best when they pair with doctors and pharmaceuticals working in a given rare disease.

“Certain verbs and adjectives make the application more credible, and therefore more likely to advance,” he said. “This would cost an organization a couple of thousand dollars, and you can get manufacturer’s support for that. Just go to the drug company and say you need an ICD-10 code for your disease.”

Companies that go out on their own have a “success rate [that] is about 5 percent, trending toward zero. A coalition of patient groups and physicians supported by the coding people is the best way to get the code across the finish line,” he said, adding, “I’d never have the manufacturer sign the application.”

“Whenever you’re trying to get access to information or reimbursement for drugs, they look for an ICD-10 code,” Furlong told BioNews Services. “In the past, we were lumped together with other muscular dystrophies, so we couldn’t really access data or make sure they were accurate. Now with the ICD-10 code, it’s Duchenne-specific.”

Likewise, the designation of Q93.51 for Angelman syndrome has been crucial not only for research into this rare disease, but for even understanding how many people have it.

“It won’t happen instantly, but as people are admitted to the hospital or treated at doctors’ offices, or as they die, the number Q93.51 will get put on their records,” said Terry Jo Bichell, PhD, outgoing director and scientific officer for the Angelman Biomarkers and Outcome Measures Alliance, and a disease expert. “Then whenever we see that unique number, we can track what’s happening.”

WHO is planning to present ICD-11— a new and improved version of ICD-10 — at the World Health Assemblyin May for adoption by member states. ICD-11, more than a decade in the making, is to take effect on Jan. 1, 2022. (A distinct code for Dravet is proposed for ICD-11, a 2012 reportnoted.)

“A key principle in this revision was to simplify the coding structure and electronic tooling. This will allow healthcare professionals to more easily and completely record conditions,” Robert Jakob, MD, team leader at WHO’s Classifications Terminologies and Standards unit, said in a press release.

“ICD is a cornerstone of health information, and ICD-11 will deliver an up-to-date view of the patterns of disease,” added Lubna Alansari, MD, WHO’s assistant director-general for health metrics and measurement.