Pompe disease can cause a range of symptoms, based on age of onset, rate of progression, and disease type

Pompe disease is a genetic disorder caused by mutations in the GAA gene, which provides instructions for making an enzyme needed to break down glycogen, a complex sugar molecule. In Pompe, glycogen builds up to toxic levels inside cells, with muscle cells being the most affected, resulting in progressive muscle weakness and other symptoms.

What are common symptoms of Pompe disease?

Pompe can cause a range of symptoms, and the age of onset, rate of progression, and severity vary markedly from person to person and among different types of Pompe disease. The most common symptoms of Pompe include: 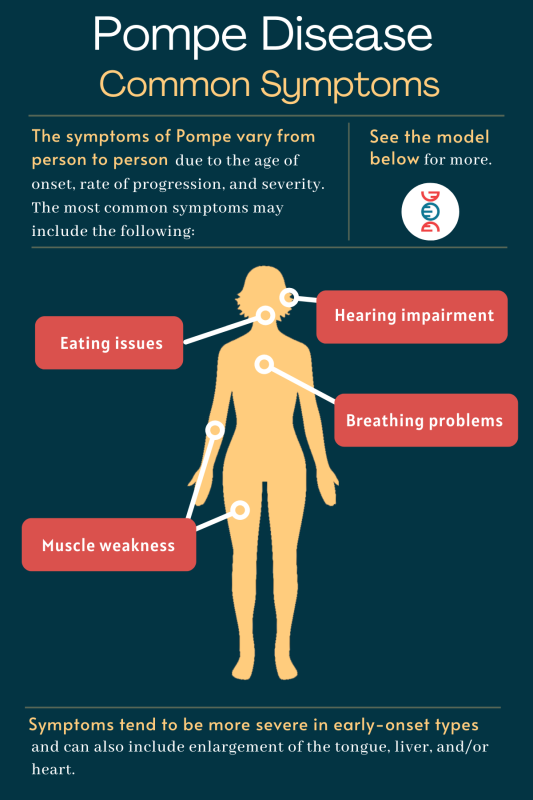 Pompe disease is divided into three types based on when symptoms manifest:

In general, symptoms tend to be more severe in patients whose symptoms appear earlier.

Babies with classic infantile-onset Pompe will, within the first few months of life, experience rapidly progressing muscle weakness and poor muscle tone. For this reason, they are sometimes referred to as floppy babies.

Infants with this type of Pompe often have difficulties with feeding and may not be able to grow and gain weight at normal rates, a condition known as failure to thrive.

They also may have an unusually large, protruding tongue (macroglossia). Hearing problems are common, and these babies may rest their legs in a frog-like position, a characteristic sign of Pompe.

This form of Pompe also is characterized by hypertrophic cardiomyopathy — when the heart becomes enlarged and cannot pump blood properly — which usually appears within the first weeks of life. Breathing difficulties and an enlarged liver also are common.

Children with classic infantile-onset Pompe disease may never be able to sit up, crawl, or stand. If untreated, babies with this form of Pompe disease usually die within two years of birth. However, advances in treatment are improving outcomes.

Babies with non-classic infantile-onset Pompe disease usually show symptoms by age 1, with infants developing progressive muscle weakness and failing to hit motor milestones such as rolling over or sitting.

While babies with this form of Pompe may have an enlarged heart (cardiomegaly), they do not develop heart disease (cardiomyopathy) in the first year of life, which distinguishes non-classic from classic infantile-onset disease. Still, muscle weakness is a predominant feature in this Pompe type, and serious breathing problems may develop.

Quick Facts: Pompe can cause a range of symptoms, which vary based on the type of Pompe. In general, symptoms tend to be more severe in patients whose symptoms appear earlier.

Late-onset disease encompasses all forms of Pompe in which symptoms develop after the first year of life. The specific age at onset varies greatly from person to person; some people begin experiencing symptoms in childhood, while others don’t experience symptoms until later in life. Generally, an earlier age at onset is associated with a faster rate of disease progression.

Virtually all people with late-onset Pompe disease experience progressive weakness in proximal muscles — the muscles that are closer to the trunk of the body, including the shoulders, hips, upper arms, and upper legs. Usually, the legs are more prominently affected than the arms.

Muscle weakness in the face and throat can cause droopy eyelids (ptosis) and problems eating and swallowing, leading to gradual weight loss. Varying degrees of respiratory problems and frequent chest infections may occur due to the weakness of the muscles involved in breathing.

What are the most common symptoms of Pompe disease?

Across all types of Pompe disease, nearly all patients experience muscle weakness. Breathing problems and difficulty eating also are common in people with Pompe. Almost all babies with the classic infantile-onset form of the disease develop an enlarged heart and heart disease

Which organs are most affected by Pompe disease?

Pompe disease is caused by a genetic mutation that renders the body unable to break down glycogen, a complex sugar molecule used by some cells as a form of short-term energy storage. Muscle cells, which require a lot of energy to power movements, normally store significant amounts of glycogen, thus muscles are primarily affected in Pompe. Cells of the heart and skeletal muscles (muscles responsible for the movements of body parts) are the most affected.

How does Pompe disease affect breathing?

When a person breathes, muscles in the diaphragm work to push air in and out of the lungs. Pompe disease can cause weakness in these muscles — and likely also in other accessory respiratory muscles — which can ultimately lead to impaired breathing.

How quickly does Pompe disease progress?

The speed of Pompe progression varies widely from person to person, depending on the type of disease as well as treatments and other factors. In general, an earlier onset of symptoms is associated with a faster disease progression.

Do carriers of Pompe have disease symptoms?