The U.S. Department of Health and Human Services added Pompe disease to its Recommended Uniform Screening Panel in March 2015, after experts had been urging its inclusion for years. Researchers working on behalf of the Advisory Committee for Heritable Disorders in Newborns and Children — a division of the Health Resources & Services Administration — concluded in April 2018 that screening the 4 million babies born each year in the United States would detect 40 cases of infantile-onset Pompe, compared with 36 cases detected clinically.

They also found that “newborn screening would also identify 94 cases of late-onset Pompe disease (LOPD) that might not become symptomatic for decades.”

Historically, infants with Pompe have lived a median six to eight months, with 75% of babies dying before a year of age. In 92% of infants with the disease, cardiomegaly (enlarged heart) develops at a median 4 months of age.

According to the American Association of Neuromuscular & Electrodiagnostic Medicine, the following should prompt a test for Pompe: limb-girdle weakness, especially pelvic; mild scapular winging; orthopnea; and weakness of the paraspinal muscles.

In fact, Mozaffar — speaking at an MDA panel on April 16 — warned that diagnosis should never be based on enzyme level alone. “It sometimes takes 12 to 14 years to even think about Pompe disease,” he said, adding that LOPD accounts for two-thirds of all U.S. cases of Pompe.

LOPD is “always relentlessly progressive and is often debilitating,” says a fact sheet distributed by Sanofi Genzyme, which manufactures Lumizyme (alglucosidase alfa), an enzyme replacement therapy that is the only Pompe medication currently approved by the U.S. Food and Drug Administration.

Diagnosing Pompe takes as long as it does because the disease itself is so complicated, said Kenneth Berger, a pulmonary physiologist at Bellevue Hospital and NYU Medical Center. “You go to a general neurologist with a weakness, and they may not know what to look for to steer them toward Pompe or one of the other common disorders,” Berger, who has treated 25 to 30 patients with the illness, told Pompe Disease News.

“If you come to a pulmonologist, forget about it. Training in an acute-care setting is predominantly a hospital-based practice. They don’t get experience in chronic respiratory failure. They don’t really know how to handle the subtleties.”

Berger added: “What happens is, in the rare disease world, once a treatment shows up, patients come out of the woodwork — particularly the adults. Children may continue to be followed by physicians because their parents are taking them, but once they graduate to adulthood, they get lost. If you’re a Pompe patient with variable disability that you’ve managed to cope with and a neurologist isn’t helping, you’re not going to see him.”

At the very least, he said, “such patients such be immunized for everything, and everyone in the house should have influenza vaccine.”

Enzyme replacement therapy supplies the body with a functioning copy of the acid alpha-glucosidase (GAA) enzyme. Yet such therapy does not address the underlying problem with Pompe — the fact that the body cannot produce the enzyme itself, and that over time, it may cause the body to mount an immune response against the injected enzyme.

One potential alternative is gene therapy, which is aimed at restoring the body’s ability to produce functional GAA enzyme on its own by providing cells with a functioning copy of the GAA gene.

Barry Byrne, MD, is a pediatric cardiologist and director of the University of Florida’s Powell Gene Therapy Center. That facility, located at the UF campus in Gainesville, has done 11 clinical trials with adeno-associated virus (AAV) vectors — more than any biotech company.

Byrne was one of the researchers on whom the character of Robert Stonehill — played by Harrison Ford — is based in the 2010 movie “Extraordinary Measures.” That film stars Brendan Fraser as John Crowley, the father of two children with Pompe whose efforts to find a cure for the disease led to the establishment of Amicus Therapeutics. 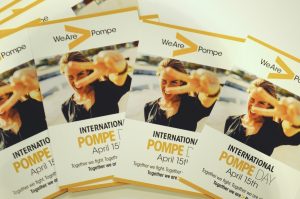 In February 2018, Byrne’s gene therapy for pulmonary dysfunction in Pompe was shown to be safe during its first human trial, which improved respiratory function in nine patients with no adverse effects.

“The key issue in patients identified as newborns who are treated with gene therapy is that somatic growth will limit the durability of that treatment,” he said. “Muscle cells are constantly growing, and we increase in size as we get older, so some of the muscle cells will not have been exposed to AAV when it’s delivered early. That leads to a loss of effect. We have an ongoing study where we’re giving multiple exposures of AAV to adults.”

A major consideration for gene therapies — regardless of the disease they are designed to treat — is the high cost of manufacturing AAV compared with Lumizyme, which retails for around $300,000 a year.

“Right now, the cost of materials to make the product is probably in excess of $1 million per patient dose. The goal is to make it affordable and broadly available,” Byrne said, adding that at present, the expected multimillion-dollar cost of any gene therapy product would preclude its general availability to those who need it the most.

“But we developed a manufacturing strategy that has a four- to five-fold higher efficiency,” he said, “meaning that if materials to make the product now cost $1 million, we think we can do it for under $200,000.”